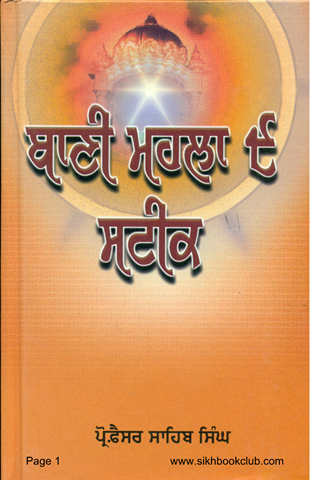 'Bani Mehla Nova' is written by Prof Sahib singh Ji and the book came out in 2003. In this book Prof. Sahib Singh presents the biography and Bani (words) of the ninth Guru, Tegh Bahadur ji. Tegh Bahadur was the youngest of the five sons of Sri Guru Hargobind,  and his wife Nanaki. He was born as Tyaga Mal in Amritsar in 1 April 1621. The name ‘Tegh Bahadur’ means  (Mighty Of The Sword), was given to him by his father Hargobind ji after he had shown his valour in a battle against the Mughals. Tegh Bahadur was married to with mata  Gujri on 3 February 1631.

The second part of the book is about Guru Teg Bahadur Ji’s Bani. Their  composition consists of fifty seven saloks and consists just 4 pages of Gurbani.  Each salok is a couplet consisting of two  lines. This Bani was incorporated into the Guru Granth Sahib by Guru Gobind Singh, the last human Guru of the Sikhs. In Bani Mahala Nova  Guru ji  said “SADO MAN KA MAN TAYAGO, KAM KRODH SANGAT DARJAN KI, TA TE ANHAS BAHGO” which means leave your mind’s lustful attraction, anger, ego and drift away from  bad people company at all times.