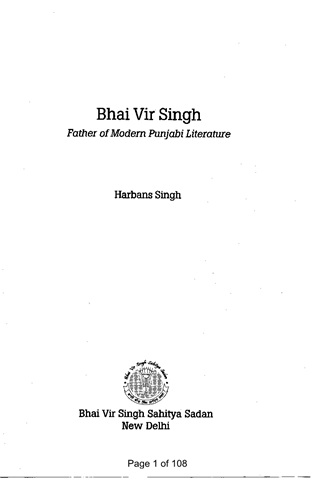 The book came out as an honest effort to acquaint the world and introduce them to a man considered as epitome of excellence in Punjabi literature. He is none other than Padma Shree Bhai Vir Singh Ji; a seminal well known figure of the literary renaissance and this book is a step towards articulating his message to the world that he made familiar with his writing.

There were many stratums in the educated society still unaware of his literary genius and particularly his personality and how his works gyrated around a specific cultural situation that prevailed in his time. This book can very well be interpreted as a biography of Bhai Vir Singh, by Harbans Singh, who felt fortunate enough to compile it and publish under the revered name of Sahitya Academy, Delhi in the year 1972. This book can be downloaded for free at sikhbookclub.com