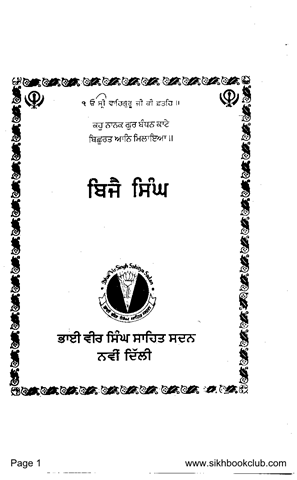 ‘Bijay Singh’, the story of the ultimate struggle for freedom from the Mughal dictatorship by Bijay Singh and his wife Sheel Kaur was put into words by Bhai Vir Singh and brought forth into the world in the year 1899 just a year after ‘Sundri’ was published. Bhai Vir Singhji made an immense contribution to the Sikh culture and community to avoid it going into obliviousness because the younger generation was hardly aware of the sacrifices made by the reverend gurus to keep the Khalsa ideals intact to a large extent. The Sikh Gurus and reverends fought with the Mughal tyranny to stop its suppression of innocent Sikh people who were religious and stuck to their roots and rejected the demand of the rulers to convert their religion.

Bhai Vir Singh created this literary version in his own native language Punjabi, which was then translated in English with the unique contribution of Shri Devinder Singh Dugaal, who made his contribution to the moral regeneration of the Sikh youth. In this translated version of the e-book we come to know about the life of Bijay Singh, son of Courtier Diwan Lakhpat Rai, who took Sikhism as his religion and was stuck to the Khalsa ideals for which he even had to leave his house with his wife as other families objected to his decision.

Bijay Singh fought with barbaric Nazir-ud-din, the governor of Jalandhar, and laid down his life for the honor of the religion and protection of his fellow men and women. Bijay Singh and others in his troop fought to end the tortures inflicted on innocent people of the Sikh community by the barbaric Nazir-ud-din, the governor of Jalandhar. The ending of the story is dramatic with Bijay Singh’s retrospection of the fact as recited by him in his painstaking moment, leading to his heavenly abode- "Blessed is the Lord of aigrette (Guru Gobind Singh) and blessed is the holy SANGAT (Holy Assembly) Blessed Blessed Blessed."