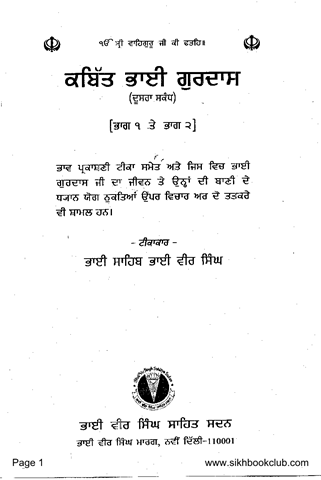 Originally written by Bhai Vir Singh in 1940, this is the seventh edition of ‘Kabit Bhai Gurdas’ which was published in 2009. The book is divided into two parts, wherein the first part acquaints the reader with the life story of Bhai Gurdas, before delving into the meanings of the beautiful verses, as explained in the second part. Written at a time when Bhai Gurdas ji was in Banaras, away from his Guru, the verses beautifully encapsulate his longing and pain of separation (birha) as an underlying emotion.

Bhai Gurdas was a known interpreter of Gurbani and Sikh literature. As a poet, he mastered Punjabi, Sanskrit, Braj Bhasha and Persian. He wrote Kabit (a form of poetry) in Braj. But his greatest contribution to Sikh Literature was in the role of a scribe, helping Guru Arjan Dev compile the Adi Granth, tediously writing for 19 years under Guru Arjan’s dictation, and also supervising other scribes working on other Sikh scriptures, namely, Bhai Sukha, Bhai Sant Das, Bhai Manasa Ram, and Bhai Haria. Today, a total of 675 verses of Kabit are known to have been written by him. Originally, verses till 556 were known, but after new discoveries in the 1930’s, it was later established that some other verses later found were also works of Bhai Gurdas.

In this book, meanings of only the later found verses are published, as Bhai Vir Singh’s analysis of original Kabit from 1 to 556 seem to have been lost. Download the e-book from the link given below.