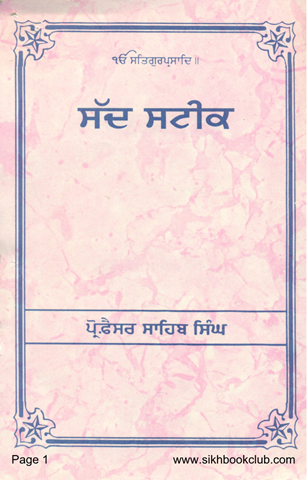 Amrit press first published Prof Sahib Singh’s tract ‘Rabbi Sadda’ in 1935, which later went on to form the basis of this book ‘Sadd Steek’. ‘Sadd’, written by Baba Sundar Singh, is inscribed in Guru Granth Sahib describing the philosophical meanings of death, and the promises of life in the Lord’s embrace hidden in it.

It is only through understanding cycle of life and death that a person can aspire to free him of the bondages of this humanly abode. In this book, Prof. Sahib Singh interprets the Bani, which holds not only the secrets of this life cycle, but also the rituals to be performed at the time of soul’s departure from this world.