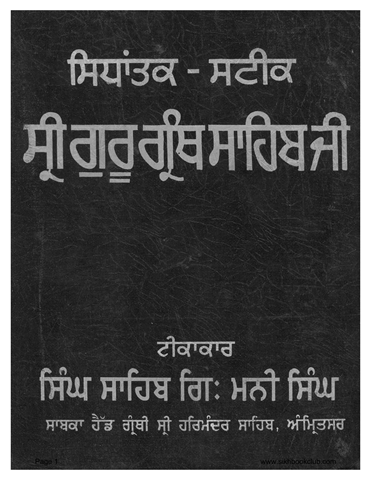 Bhai Mani Singh acted as scribe when at the age of 14 Guru Gobind Singh Ji - the then Guru of the Sikhs - dictated Sri Guru Granth Sahib. He also transcribed many copies of the sacred Sikh scriptures which were sent to different preaching centers in India. He also taught the reading of Gurbani and its philosophy to the Sikhs. Bhai Sahib was responsible for collecting the Gurbani of Guru Gobind Singh Ji and compiling it in the form of Dasam Granth . Besides this, Bhai Sahib also authored Japji Sahib Da Garb Ganjni Teeka . He expanded the first of Bhai GurDas's Vaars into a life of Guru Nanak which is called Gyan Ratanawali.