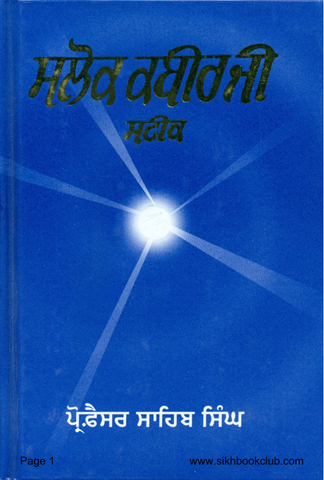 Published in the bloodied year of 1947, Slok Kabeer Ji Steek is an important link towards what later became the Bhagat Bani Steek series. Initially inspired by the knowledge of some followers deriding works such as Bhagat Bani, Bhatta De Sawayye, Sadd, Satte Balwand Di Var as against the tenets of Sikhism, Prof. Sahib Singh set out to write the interpretations of these hymns to clear out the misgivings being spread by such false propaganda.

Surrounded by the mayhem of Partition all around him, Prof Singh sought relief to his soul in the treasure chest opened to him in Kabeer Ji’s deep philosophies about life, love, devotion, and submission. Revered as a pious soul across followers of different religions, Kabeer ji’s teachings of universal humanity are a stark contrast to the madness that masquerades as religion following the painful period Slok Kabeer Ji Steek was written in. Balm your soul with this read, at sikhbookclub.com