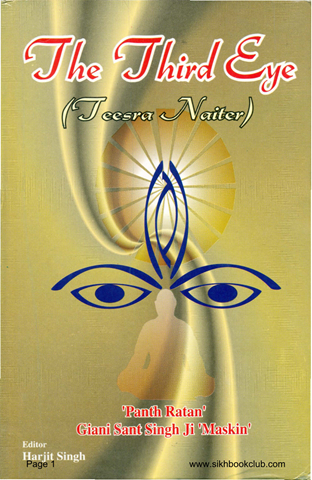 The Third Eye or Teesra Naiter as named in Hindi has eight topics relevant to humans of every caste or creed irrespective of his or her religion. It is based on the universal Guru not only for the Sikhs but for all as it is most piously mentioned in the Guru Granth Sahib Ji. The lovers of Gur Sermon will be delighted to read a unique literary piece dedicated entirely to them. With the presence of knowledgeable people like Maskeenji as he was kind enough to publish literary evidences that will make readers closer to their religion and able to interpret their true essence.Eighteen of the most important aspects of life are covered here and are interpreted with great austerity to explain Saint, Ascetic, Three Attributes, Salvation, Meditation, Contemplation, Prayer, Dust of Feet, Ecstasy, Sea of Fright, human being, Post of Salvation, Preacher, Hermit, Sleep, Life, Exhilaration of Meditation and Dedication.